I intended to do this post a while ago when we were going to go see Toy Story 4, but for a number of reasons our trip to the cinema just didn’t happen so I think it’s only fair that I give this book the attention it deserves.

We are huge Disney fans in this house, not only of the cartoons but the live-action too and my mum will forever be grateful to Disney films for giving my brother a language and ‘script’ by which he could communicate in light of his difficulties.

Toy Story has been a huge part of our childhood and grown up lives; I remember how cutting edge it was to have a complete movie done in Computer generated animation and how groundbreaking everyone said this film was- so to think that I can not only share the original but the 4th incarnation of Toy Story (with all the improvements that every Disney- Pixar animation has brought since) with my own children is a pretty mind-blowing one.

This book by Carlton books is a pretty awesome introduction to the characters, and the perfect lifesaver prep material if your anything like us.

I have to ask the parents, grandparents, babysitters or much older siblings out there reading do the young children you know always ask ‘Who’s that’? or in our case the Classic ‘Wossisname wossedoing?’ at the very first mention of a character and ‘Dunno just watch’ is not an acceptable answer?

To save blushes, continued questions or trying to google/IMDb in your seat this book is pretty perfect- it reintroduces all the key toy characters with the reference of who and where they came from.

Then after revisiting baddies from the first three films it introduces the new (or improved) characters of Toy Story 4.

The girls lavished attention on the Ducky and Bunny page as it’s quite a coincidence that those are animals we associate with the girls!! 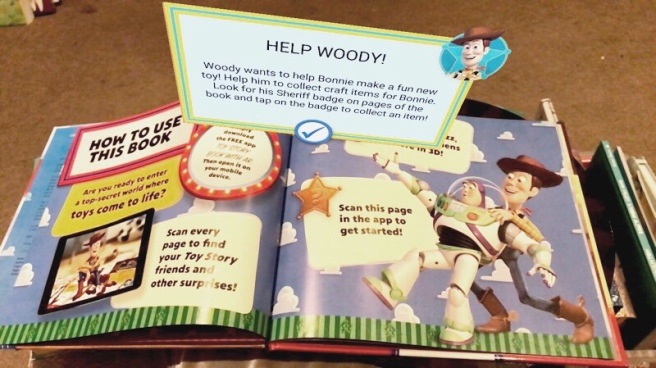 In addition to the brightly coloured pages and perfectly captured images of the characters there is a augmented reality app that can enhance the experience of the book.

You can do things like press Buzz Lightyear’s buttons though he sadly does not do the ‘Buzz, Buzz, Buzz Lightyear to the rescue’ thing though perhaps that’s a good thing as that was one of my favourite parts of the original film, and even the original large-size action figure didn’t do that- I know this from experience 😆

You can also stack aliens and collect the pieces to make Forky. This is great fun for a young child but be aware Woody is a little ahem floppy (no I’m not being rude) and the app is quite draining on your device battery due to utilising your camera.

Overall I like this book, it’s fun, it’s playful and it’s a great way to prepare a child to watch Toy Story 4 and familiarise themselves with the characters, whether you use the app or not thebook still has plenty of value.

I also love the way that Carlton Books make a point of crediting the design people involved in the book too.