Ok so coming to this series late the short stories that Robins Stevens created to punctuate the novels are brought together in such a fun way with a collection of essays on the history of the Detective novel, books that inspired, codebreaking hints and tips and even recipes to recreate bun-breaks!!

The stories interspersed are very interesting and give context and colour to the novels:

The Case of Lavinia’s Missing Tie

This short story gives us an insight into the day to day nonsense and a little bit of the nastiness that happens between girls who are stuck with each other day and night and are missing their families.

The Case of the Blue Violet

This short story is written from Daisy’s perspective which is quite an adaptation as she is much more rushed and lacking in detail compared to Hazel.

However, her own writing betrays a much softer side of Daisy, she comes across somewhat younger, sweeter, even hopeful than Hazel writes her even if she retains the proud business-like tones.

Haven’t you read books? I don’t see why you shouldn’t marry him. He knows poetry and can drive.

What I also find interesting is that she encourages love and marriage to Violet, something we see her dismiss for herself as she doesn’t get it and then discourages in Hazel. Yet the way she speaks to Violet betrays she does get the value more than she protests and that she has a softer side that believes in love but when it’s the right person even if it crosses the lines of what we are expected to do- here an unintentional upstairs-downstairs romance which is very liberal thinking for her time and class.

The Secret of Weston School

This is written from Alexander’s perspective and we see a mystery tale with a bit more mystery than the girls’ minor ones!!!

We also get a little more insight into how the boys think and deduce compared to how we know Daisy and Hazel do. They will have some discussion on this factor at Christmas in Mistletoe and Murder of how the girls focus on suspects and the boys focus on evidence.

We also get to bask a little in the glory of George Mukhajee from his coin flipping chicanery to his style of shadowing people. But Daisy is right, it shows the superiority of the Detective Society.

The Detective Box used to be a biscuit tin, and still has a Scottie dog on it. Sometimes I imagine that it is a real member of the Pinkertons. Imagine how many more crimes we could detect with a dog!

We also see just how incredibly young Alexander is, Hazel in her adoration writes him much more mature, capable somewhat ‘preppy’ yet in his own writing he comes across more like a bumbling puppy following in the wake of George’s gloriousness. I’m sure the reality is somewhere between the two, but perhaps this equally has a lot to explain his crush on Daisy.

The Case of the DeepDean Vampire

Again written by Daisy this one shows a side that Hazel seems perpetually surprised to see; a soft and caring one even if it is delivered in a pragmatic tone.

Daisy’s behaviour to Amy’s father although directly challenging and slightly disturbing is both sweet and shows a belief in love and family something she puts a wall up about in front of Hazel, or at least she seems to perceive it that way, perhaps Hazel is more of an unreliable narrator than we might think!

The Mystery of the Missing Bunbreak

Ok this one just about broke my heart, ive always loved Beanie she has SUCH hidden depths, I rage for her with the lack of support for her dyslexia and dyscalculia and the distress it causes her but I just about lost my heart to her with this story.

Sometimes I think everyone else in the world sees and hears things properly, while they fly straight past my brain and out of the nearest window.

We see so much more backstory as we explore ‘the other Christmas’ with Beanie and Kitty after Beanie’s parents have gone to Spain without her for Christmas in the hope it will make her mummy well again (oh my heart!).

We see a little more of why Kitty is so forthright, proud and strong with her father refusing to apologise or pretend about his wealth unlike The Wells’ as to pretend to be poor is in poor taste. We also find out a little more about Beanie’s father who is new money and worked his absolute backside off for it.

I am with Kitty, and it is nearly Christmas, and I am going to be brave

Kitty has hidden depths as we find she has gifted Beanie a dictaphone to help her tell her thoughts and stories for someone else to write down instead of thinking herself stupid and her style is so beautiful, lyrical and soft compared to both Hazel and Daisy.

Because Rebecca Martineau may cry at games about murder, but she is far from stupid. This story reveals much more how INCREDIBLY observant she is about others including the secrets and nuances of behaviour they may not realise themselves, even down to scent.

And it is Lavinia that always saw this and believed in her even if we see just how vulnerable Lavinia is through this story feeling on the periphery of two very deep and meaningful relationships Daisy/Hazel and Kitty/Beanie ‘it’s never me that people want around’ , she still believes completely in Beanie. 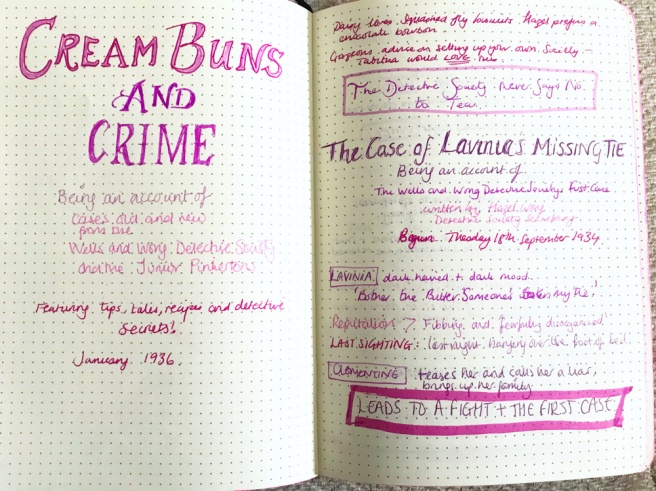 I loved these little insights, from the essays on the inspirations and context of the novels to the short stories themselves and the recipes are certainly inspiring too.

I do prefer the full novels but for the little bites of insight into the wider characters and interactions outside of Hazel’s perspective of them.

I look forward to more short stories as much as the novels themselves!! I’m really hoping the World Book Day mini story is going to be from George’s perspective!

Cream Buns and Crime by Robin Stevens is published by Puffin.