I was delighted to discover that Frostheart was the Believathon group read, I’ve been looking forward to this book for some time as the idea of a fantasy quest in snow and ice is exciting enough but when you throw in illustrated middle grade this is very exciting.

Frostheart is a great group choice for Believathon, it fits into so many of the wonderful things of Middle Grade, the outsider, the undeveloped talent/skill, the embarking on a journey, the older gruff teacher figure, a puzzle to solve and a tricky villain and will appeal to fans of anime with its magical battles.

I’ll try to keep this review as spoiler free as possible as usual.

In a world of ice and snow where six eyed giant monsters roam underneath waiting for anything to move, surviving humans have retreated to strongholds in hills and mountains elevated above ground level. In the Fira stronghold singing is banned after tales of a Song Weaver turning bad and wreaking destruction… Ash has been passed from foster home to foster home since his parents never returned, and he’s running out of options because he has an urge to sing, especially when the Leviathans attack.

When one song goes too far he hitches a ride on the Frostheart, a trading sleigh with a motley crew including a walrus-like Captain, the former drifter Lunah and broodingly intense and a bit too curious Shaard, and embarks on a journey south across the Snow Sea in search of not only his parents, but meaning to his singing… and his foster Yeti Tobu comes along for the ride.

After all these years of having to bottle up his song denying it even existed- at last he was able to release it, and it burst out like a torrent. He felt like he was flying, like the fears that had clouded him for so long were burned away in the light of the song.

First of all, it’s a cracking good story. It follows the classic Hero quest but it is elaborated with a fantastic setting, awesome landscape and a fascinating magical system that has the feel of Eastern mysticism and anime with its channelling of life force here through song and Tobu the Yeti guardian advocating the cultivation of inner peace and understanding of the songs of all beings through exercises including meditation. Of course I loved this!!!

The anthropomorphic creatures that accent the world of Human-kin is brilliant and lifts the narrative from the dark and perilous places it goes at time with Yeti, walrus like mursu, fox like (and rather bonkers) Vulpis brings has a whimsy that takes the edge off the nail biting interactions with the Leviathians.

The relationship between Ash and Tobu has this wonderful dynamic, Ash in his youthful fear and impatience leading to misunderstanding especially through Tobu’s Mr Miyagi approach of learning without ‘doing’ the skill. Tobu is wonderful in his gruff Luke on Ahch-To approach to being even a foster guardian and yet with the ability to reflect and adapt over time. 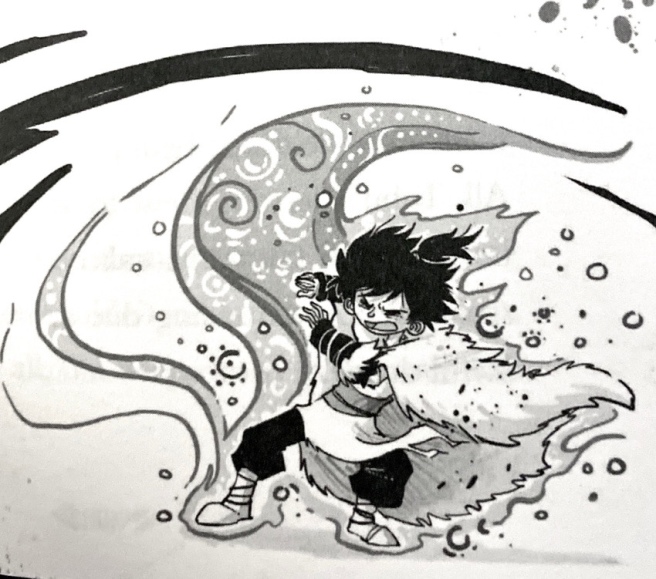 The illustrations are what also sets this apart from other middle grade and is a move I would like to see more of to encourage reluctant readers and for those children for whom illustrations are a huge part of their enjoyment of reading and despair as deeper more complicated books become pictureless. Those who appreciate anime style will adore Frostheart with Jamie Littler’s distinctive style with a dash of Studio Ghibli magic with the capturing of movement, features and facial expressions.

Overall, I thoroughly enjoyed this frosty adventure and I am looking forward immensely to the sequel. I particularly appreciated that you barely go 4 pages before there is some kind of adornment, mini illustration or full page design, and all illustrations accent the text effectively.

Frostheart by Jamie Littler is published by Puffin Books