This post is looking at book series that ultimately carry children with the same characters and concepts from toddlerhood all the way through learning to read and becoming an independent reader.

These books grab the attention and hearts of youngest children through Picture Books first but then offer the option to move onto longer but Illustrated Young Readers books whether short story, highly illustrated or early chapter.

This is to help children across that stage between learning to read and building the reading stamina with characters they know and love, and sometimes plot devices or quirks they expect to see too giving them a deeper confidence to eventually embrace longer books they may want to read.

They are also excellent books by themselves whether picture or Young Reader. Some started as Picture Books, some as Highly Illustrated some as illustrated early chapter books but the concept is still the same.

I have noticed that Littlefae loves a book that we can read together and has a picture book too- they’ve also had a huge effect on Tinyfae (almost 3) as she loves the picture books and now she’s approaching 3 she sees the older books her sister enjoys and wants to know the stories too. Intrinsic motivation to read in action!!

Luckily there are more than you may think!!

The beret loving dog who goes on adventures when his owners at work cemented Claude as a favourite for children anyway and with the Disney Junior series appealing to even younger children it was only natural to see these excellent stories expanding into picture books.

Fans of Shifty Gifty & Slippery Sam the baking mystery solving dogs need to know where they started in the first Picture Book as failed criminals who turned their lives around!

The Picture books rhyming is great for pre-readers phonemic awareness and the stories get longer and more complex as we move to the highly illustrated young reader stories.

The tales of Pandora and her witchy granny getting into mischief are a firm favourite with both my girls and Tinyfae has started to request the longer stories as she loves them so much.

Again the picture books help build phonemic awareness and the bright highly illustrated include 3 stories and are great for bite size chapters to build stamina and feel a sense of achievement. 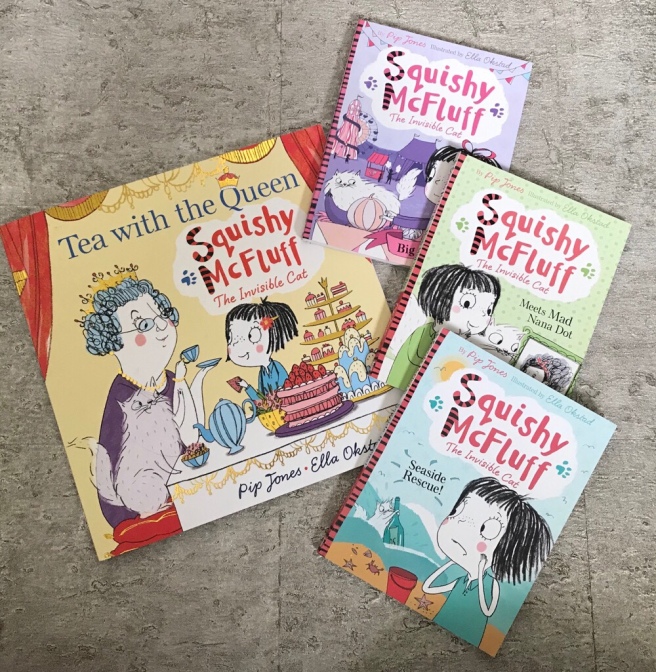 Ava and her Invisible cat Squishy McFluff and their adorable adventures have become a firm favourite of Littlefae and with the recent publication of the Picture book adventure Tea with the Queen now Tinyfae can identify the Squishy Mc Fluff Highly Illustrated Early Reader Books and wants to hear them too. 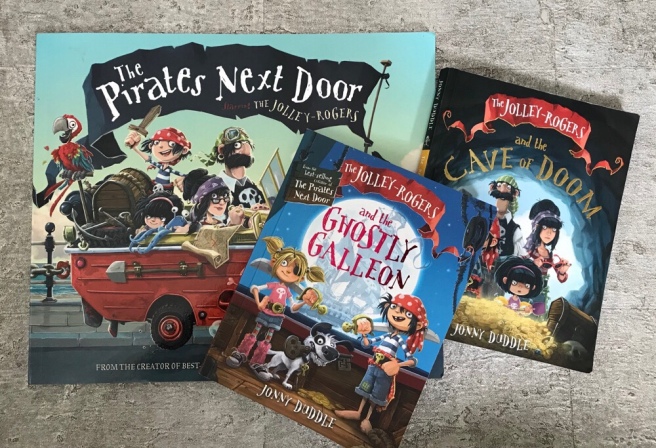 The Pirates Next Door Jonny Duddle & other PB stories (Templar)

Follow with The Jolley-Rogers stories by Jonny Duddle (Templar)

These playful picture book stories about not judging a book by its cover are followed up in highly illustrated adventure stories extending the adventure for children who like their stories with a little more action and peril. 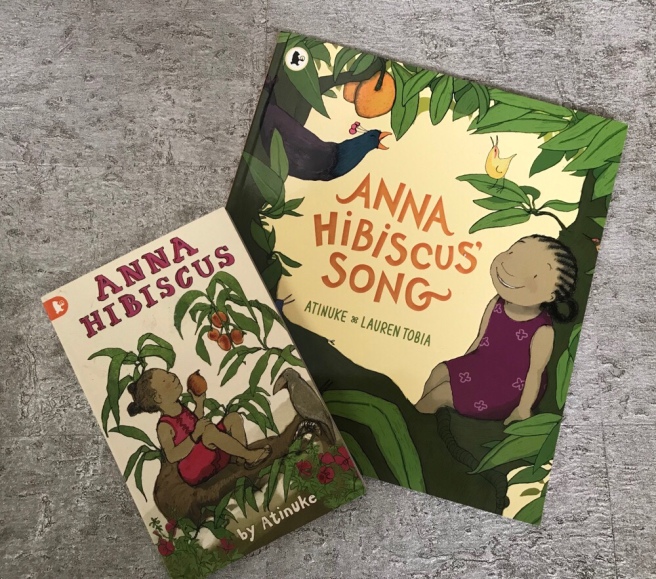 Anna Hibiscus stories are a gorgeous early chapter book series with illustrations scattered throughout of Anna’s life in Africa as a mixed race girl whose Canadian mum has blended into the culture but it gives plenty of natural interest points to compare against such as going to visit her grandmother in the snow! 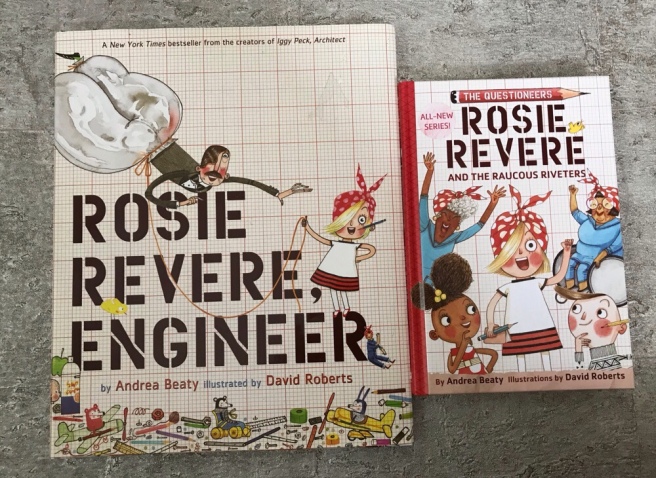 Rosie Revere is one of the Power books for girls in STEM, same with Ada Twist Scientist by the same author & illustrator.

Daisy and the Trouble with stories are about the problems and trouble that Daisy gets up to when she is school aged, whereas Daisy picture books are what she gets up to when a little younger so there is a natural progression for readers to associate with Daisy. 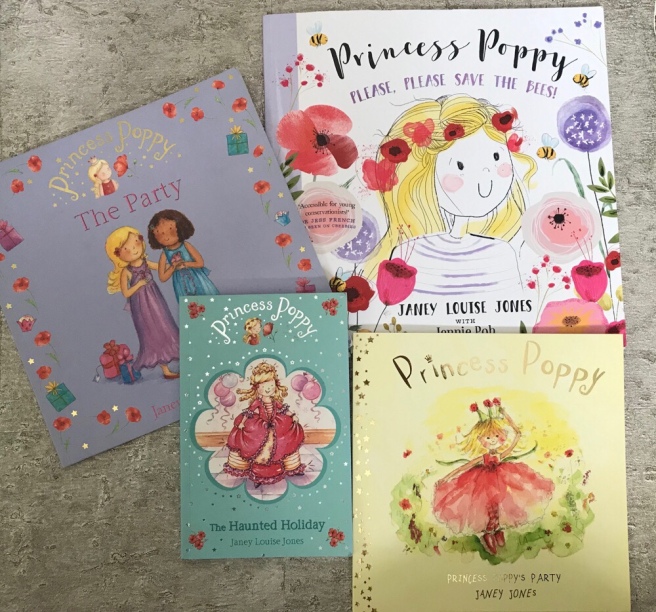 Whilst the newest Princess Poppy has been a sensation in my house especially with its ecological twist, the character has been published across two decades and the original stories still delight both my girls as they are about a kind-hearted little girl who like Sara in A Little Princess believes all girls are Princesses.

The early chapter books are longer adventures with Poppy, her family and friends but are familiar characters meaning even though they were written to match the older series, children jumping in on Princess Poppy from Please,Please Save the Bees will know her too. 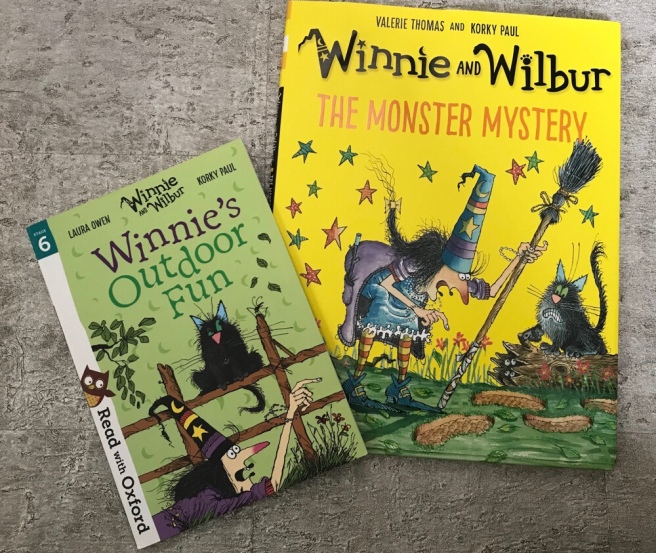 Winnie & Wilbur have been a favourite of children for decades with the batty witch making mistakes and getting up to nonsense making us all giggle.

Then Laura Owen was brought in to make more Winnie & Wilbur Stories accessible for early readers with collections of 4 slightly longer stories in a smaller paperback but keeping Korky Paul’s outstanding illustration style, just in Black and White (unless you get the Read with Oxford edition above which is in colour but one single story).

These gorgeous gentle nostalgic stories about a bear from Darkest Peru making his way in the world have understandably become a classic- but parents who loved Paddington and want to share with their child (especially if they loved the films) don’t always remember how the original stories were early chapter books.

This is where turning some classic sections from the books into Picture Books in glorious full colour edition now illustrated by R.W Alley with a sensitivity to the beloved original but embracing a little more of a modern design with nods to the film character.

I know Littlefae wanted to be read Paddington when she was 4, it didn’t quite work, but these picture books she LOVES and will help her make the jump to the original in time.

So these are the ones I gathered and can vouch from personal reading, I know I’ve missed out Fancy Nancy as she has chapter books too but we don’t currently own any of the older books.

Do you know of anymore?

What do you think of this progression in reading, is it a great idea or not?

13 thoughts on “11 Stories to carry you through Toddlers to Tween: Picture Books & their Early Reader counterpart.”